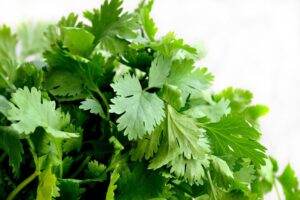 History: It’s not an exaggeration to say that cilantro is an oldie but goodie. The wispy green-leafed herb known to much of the English-speaking world as coriander is thought to be among the first group of domesticated plants, dating to the 6th millennium. Beloved worldwide, both cilantro and its dried coriander seed are seasoning staples of countless cuisines and historically revered for their medicinal properties.

Flavor: As anyone who’s ever tasted cilantro will tell you, the flavor (and often the aroma) of fresh cilantro is unforgettable and unlike anything else — where musky meets citrus — a flavor profile that you either love or hate. When shopping, look for leaves that are dry and free of dark green goop, which tends to accumulate around the stems when cilantro is ready for the compost bin. No yellowing or wilted leaves, which are signs of decay. Fresh bunches should smell bright and citrusy, not moldy or dusty.

Storage: Keep fresh cilantro refrigerated, standing upright in a tall glass, like a bouquet of flowers, and loosely cover with a plastic bag. Cilantro is perishable and will quickly break down. Storing it in the crisper in a plastic bag will show just how fast it can turn to mush.

How to use: You can stir cilantro into a pot of black beans, garnish a veggie stir-fry, or to give a Thai edge to cut-up pineapple, mango or even cucumber. For even more kicks, throw in a handful of chopped peanuts, a splash of soy sauce and some fresh minced chile pepper.

You can use a food processor to grind cilantro leaves, after they’ve been washed and squeezed dry, to add to soups or as a garnish. If you prep a large bunch of cilantro this way, you can then freeze it in an ice cube tray and save for later use.

Nutrition: Cilantro covers the bases for several nutrients, including calcium, potassium, iron, Vitamins A, E and K and folate.