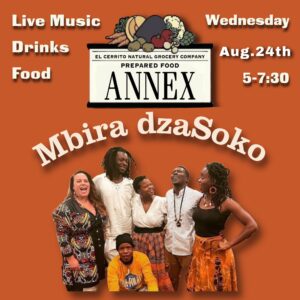 Mbira dzaSoko performs celebratory and spiritual mbira music from Zimbabwe, led by mbira maker, musician and teacher, Salani Wamkanganise, along with his musical friends. The mbira is a sacred instrument created and played by the Shona people of Zimbabwe. It is made of metal keys attached to a wooden soundboard, and usually has bottle caps or shells which help create a buzzing sound along with the tones. Mbira music instantly draws people together. Mbira music blurs the lines between audience and musicians, excluding none. The music is celebratory-come and be transformed by the joy of Zimbabwe!

Salani Wamkanganise is a Zimbabwean mbira maker and player, teacher, and cultural ambassador, who now resides in the San Francisco Bay Area. After performing, recording and touring nationally and internationally, Wamkanganise moved to the San Francisco Bay Area, California, and continues to build mbira, teach, and perform. He has worked with The KTO Project, PIWAI, and heads the group Mbira dzaSoko with his solid bass singing and rhythmical mbira playing.

When asked about making mbira instruments, Salani stated in an interview: “The art of making the mbira instrument requires persistence for perfection, precision, attention to detail, mindfulness, a sense of beauty and commitment. There is a mixture of three trades in one, carpentry, metal fabrication, and a musical soul; thus, mbira making falls between art and engineering.”

We are proud to present this series in partnership with Modupue (Javier Navarrette) and SunJams.