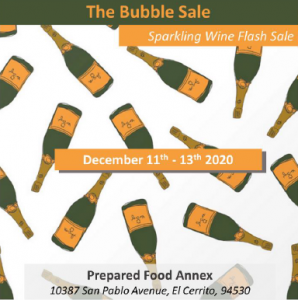 10% off any bottle of bubbly

20% off mixed cases of bubbly 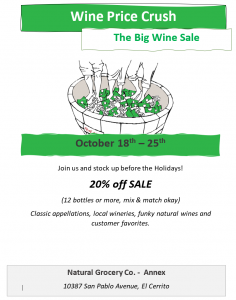 Stop by The Annex and stock up for the holidays! 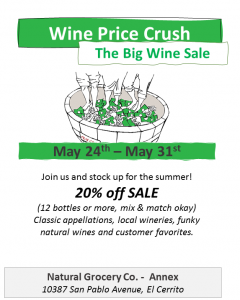 Eric Asimov, for those of you who may not be familiar with his name, writes about wine for the New York Times. I really like his writing and his perspectives, so I was quite pleased to read his recent article “Want to Pick Better Bottles? Repeat After Me: Wine Is Food” (NYT, 3/6/2017).  In his clear and compelling way, Asimov describes to a T what we are all about here in our Annex Wine department. It practically reads like an endorsement of our approach.

For us at the Natural Grocery Co., wine is food, it is an agricultural product. We pay close attention to how the grapes were grown, and how they were treated in the cellar. I choose wines that, besides being delicious, are produced at least sustainably and at best regeneratively. My favorite stories from winemakers include how they took an abused parcel of land and brought it back, literally, to life.

There are certainly many people for whom wine is just a drink, and there are a lot of options out there. But for those who want more than just a cup of liquid unwind, there’s more to the story.

With customers, I often use the analogy of bread. Imagine on one end of the spectrum the highly processed, industrial, chemical-laden, food-like artifice such as Wonder Bread. This clearly makes some people happy. On the other end would be a naturally leavened loaf, made with grain from a known source (or even a known field), freshly ground, kneaded by hand, unhurried, and that is a clear reflection of its maker. Bread full of life, and deeply delicious to boot.

It’s the same with wine. I absolutely agree with Asimov that “a simple way to understand wine, to elevate the quality of what you consume and the pleasure you take in it, is to treat wine as if it were another staple of the table, just as you would the produce, meat and bread that you shop for and eat.”

Now, it was true for me, and is true for many (and Asimov also makes this point), that wine is one of the last things we think about as we procure quality ingredients for the table. I know in my life it took me a while to learn to prefer food I could relate to, where I knew the farmer and knew the story of how and where that food was grown, and where and how that food was processed. I wasn’t born a foodie: I’ve earned that title.

So now, I expect that for a significant percentage of the food I eat, and wine I drink, I know its backstory. Like all food we eat, wine is a product of the earth and an expression of our relationship to it, for better or worse. I try to choose better, and ultimately, that adds to my pleasure at table and sense of connectedness to the community and land around me.

Pleasure, connectedness, delicious clean wine and food. Surely these are among the best things in life, and for that, I can be grateful every day. 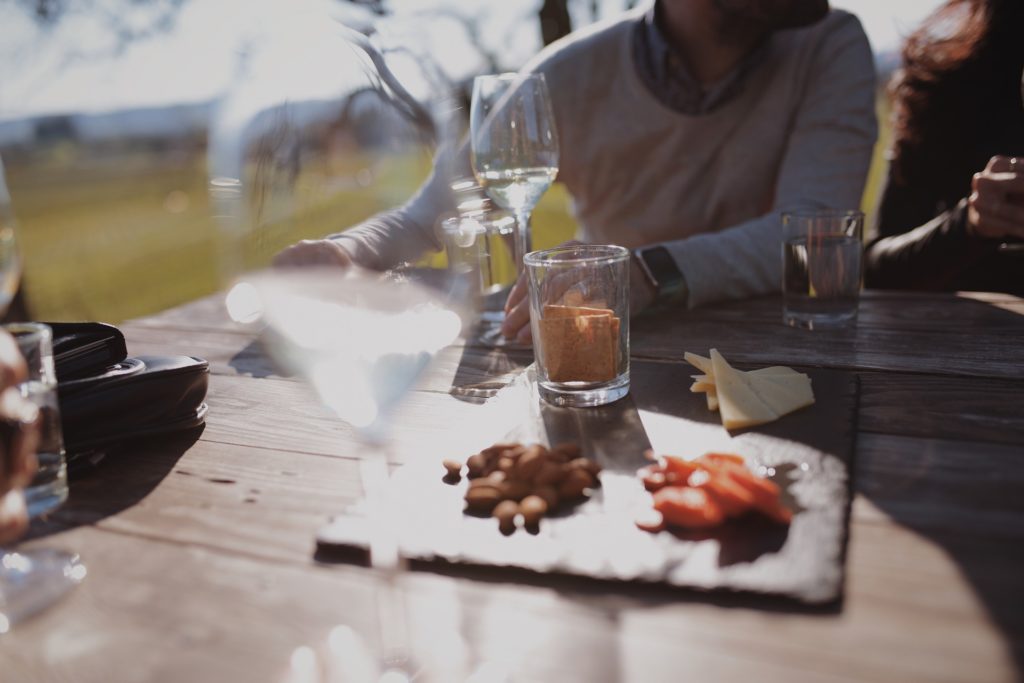 Taste 30 small production wines at the ANNEX for just $10!

We are hosting our 5th bi-annual Grand Wine Tasting and Price Crush Wine Sale. On Sunday, October 9th from 2 to 5pm come to the Prepared Food Annex (10387 San Pablo Avenue) to taste 30 wines by artisan producers. The ticket price for the event is $10. This may be the most affordable wine tasting event in the Bay Area! Annex Wine & Beer handpicks products to bring you clean, natural, sustainably-produced wines, a large number of which are certified organic and biodynamic.

If you would like to read more about us and other natural wine shops in the East Bay, check out this article.

While all of our wines shine, every now and then we bring in a standout that we really want you to know about.  Just in, the Pyramid Valley 2015 Marlborough Pinot Gris/Pinot Blanc is a wine of such vibrancy and focus I just have to sing its praises. There is a lot going on in this complex beauty: intense aromatics that open with time, a lush nuanced palate, and a long, lingering, beguiling finish.

It was a standout even among other wines from Pyramid Valley, as I discovered recently when I tasted with winemaker Claudia Weersing here at Annex Wine & Beer. She and her husband Mike surely do make some of the world’s eminent natural wines, with deep devotion to biodynamic principles and the expression of their unique terroir.

This is a wine that takes you places.

Also available from Claudia and Mike:

My love affair. It almost didn’t happen at all. It was a chance meeting, but it irrevocably, irreversibly turned my world upside down.

My wife made a simple seafood stew, with rockfish, shrimp, some clams and mussels – a working parent’s cioppino. Now, what wine to pair with this? I didn’t want a white, and pairing a red felt like a little too much. I was about to default to a rosé when I remembered I had already picked out a wine, by reputation only, for a meal just like this.

This wine was a Rossese di Dolceacqua, a light and savory red wine from the Lugurian region of Italy.  Think Genoa, La Spezia, even Cinque Terre. This is a rugged land that lives in close relation to the sea, and like all Italian cuisine, the wines and foods of the regions evolved together in time-tested harmony. This is seafood country, with simple stews like my wife made as common fare.

The wine poured a tawny, almost brick-like red. It had intense fruit aroma, with herbal and woody undertones. It was very light bodied, and upon tasting, the savory, herbal notes were enticingly apparent. A bite of stew, then another sip of wine… and that’s when Cupid shot his little vinous arrow. What a heavenly match!  It was one of those elusive, serendipitous moments when the whole far outweighed the sum of the parts.  That Rosesse and that stew danced together in the most delightful, delectable, delicious way.

I read somewhere that if you find Rossese in the States, it’s because someone really loved this wine and felt it needed to be imported. This is not anyone’s definition of commercial success, but rather a soulful appreciation for obscure, underdog varietals rooted in local traditions and cuisine. In fact, Rossese is deeply rooted along that part of the Mediterranean coast, and thrives even west into Provence, where it is known as Tibouren (and largely made into rosés).

Luckily, I work with an importer who found a lovely Rossese made by a committed, salt-of-the-earth winemaker named Danila Pisano.  If the best wines are a reflection of their maker, then Danila is surely humble, strong, earthy, and mischievous by turns (and by all accounts, she is). She and her longtime boyfriend Tino (whose family owned the vines) work the dizzyingly steep slopes and terraces to bring forth low yields of this thin-skinned, light red grape. It is a labor of love (emphasis on labor) that brings this delicious, relatively unknown wine to our shores.1

But for those who know, the grape and its wine is a delight. Even the iconoclastic Randall Graham of Bonny Doon calls Rossese “one of the coolest grapes on the planet.”2 I wholeheartedly agree, and I am grateful my fortuitous discovery happened to be with one of those meals that take both food and wine into the stratosphere. I had never experienced the pleasures of light, gamey, savory red wines before.

Did it really turn my world upside down? Well, it certainly opened the door to a whole world of heretofore unknown pleasures.  You see, now I chase after all light and bright reds, from snappy Gamays to minerally Zwiegelts, fruity Grolleaus to funky Pipeños.  Put a slight chill on any of these, and savor the warmth of summer and its lighter cuisine.