We recently started selling Burroughs Family Farms organic, non-GMO, cold-pressed extra-virgin organic olive oil [aka EVOO]. This exemplary family-owned farm, situated in the Sierra foothills below Yosemite, is one of our favorite regional producers. We already source quality pastured eggs, organic cheese, and almonds from their property.  The Burroughs Family Olive Oil is a blend of Arbeqina, Arbosana and Gretchenina olives (originally from Spain). The oil has a pleasant fruitiness with hints of grassy undertones. It is very versatile and may be used in sauces, salad dressings, as a topping to bread and for low heat cooking.

Here is what Burroughs Family Farms says about their oil:

Our olives are first cold-pressed at temperatures that do not exceed 80 degrees F. This protects the polyphenols, antioxidants, and vitamins that give the oil its nutritional value and its aroma and flavor.

High quality extra virgin olive oil has a smoke point of around 405ºF (191ºC), making it ideal for lower temperature cooking such as light sautés and non-cooked uses such as dressing salads and dipping bread. Such uses protect the nutritional value and beneficial qualities of the oil.

Conservation on our farms

Ours is not the easiest way to grow olives, but we think it’s best for our land and for our family who lives and works here. From organic production to state-of-the-art irrigation systems, we do whatever we can to protect air, soil, and water from herbicides, pesticides, petrochemical nitrogen fertilizers, and genetically-modified organisms. All that, plus our hedgerows of native plants support the health of native species and bees who have the most important job – the pollination of the olive flowers.

We do it for the future of our farms. For you, it’s deliciousness and more.

Burroughs Family Olive Oil is certified annually by the California Olive Oil Council (COOC). Year after year it’s labeled “extra-virgin” by the council. To get the seal the oil is lab tested and 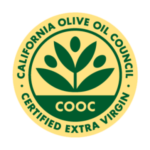 undergoes a critical analysis by an expert panel. The trained sensory panel (think of these people as the sommeliers of olive oil) ensure that the oil is free of defects in flavor or odor. In the U.S., many oils are labeled “extra-virgin” but do not undergo any such testing. While shopping in our El Cerrito store bulk section, I was tempted to try the organic oat groats instead of the rolled oats. I was both inspired by the current sale price ($1.19/lb) and want the healthiest option for our five year old son. Our bulk buyer, David gave me another reason. He said, “why not eat things as close to the way mother-nature produced them as possible.” I can’t argue with that logic so I bought a bulk bag of groats.

Here’s what I did to process the groats: 1 cup of groats in 3 cups of water

Before bed, I put one cup of groats in a heavy bottom stainless steel pot along with three cups of water. In the morning, I turned the burner on medium heat and started cooking in the same pot where I soaked the grains.

Every 10 to 15 minutes, I checked the pot and stirred. 30 minutes into cooking, the groats were sticking to the bottom of the pot so I added more water (1 cup). I also added ¼ cup of raisins, a pinch of salt and a dash of cinnamon. 20 minutes later I added another 1/4 cup of water because the water was nearly absorbed. The groats cooked for a total of 1.5 hours. I added additional water (1/4 cup) another three times during the cooking process.

If you cook groats at home, add water as you see fit. It takes a lot to overcook groats but very little to burn them when there is not enough water in the pot. In other words, keep ’em hydrated. The groat cooking process took longer and required more attention than the rolled oats. However, the nutritional benefits make the extra time worth it (when time allows!). For hurried mornings, consider cooking a larger batch. Soak the groats before heading off for your day, cook them in the evening and re-heat them with a little extra water and/or milk in the morning. Or, make enough for leftovers every time you prepare groats.

Why Eat Oat Groats? Here’s what one of our wholesalers (Hummingbird Wholesale) writes about this wonder grain:

Organic Oat Groats are whole oats with only the outer husk removed.

In general, oats have more protein and healthy fats, and less carbohydrates than most other whole grains. This grain is high in beta-glucans, which work to stimulate the immune system. They contain more soluble fiber than any other grain, and oats are also beneficial for their anti-oxidant, anti-inflammatory, and anti-itching qualities.

Sounds like a great food if you ask me! Here’s to your morning meal!